Having taken the often-difficult decision to end a marriage there are certain practical considerations to take into account prior to making an application for divorce.

The document that starts the divorce is called a petition. A petition for divorce can only be presented to the divorce centre if the marriage has lasted for a year in duration and the relationship has irretrievably broken down.

Unfortunately, despite recent campaigns for no fault divorce to be introduced into UK law there is currently no provision therefore the parties are sadly forced to apportion blame unless they have been separated for two years.

The only ground for divorce is currently that the marriage has broken down irretrievably. There are five facts listed within the Matrimonial Causes Act 1973 that can be relied upon when filing a petition for divorce; adultery, unreasonable behaviour, desertion, 2 years of separation or 5 years of separation. The divorce procedure is started by one spouse, they are referred to as the ‘petitioner’ the other party to the divorce is known as the ‘respondent’.

Although the location where the marriage ceremony originally took place will not have an impact on the divorce process an application for a divorce in England and Wales can only be bought if both parties meet certain residence conditions or are domiciled in England and Wales. We would highly recommend obtaining advice from a specialist family solicitor if there are any issues relating to domicile and residence as this can be a complex area.

As the divorce process is mainly administrative there is no requirement for the parties to attend court a divorce is almost always dealt with by a judge by paper. Generally, the divorce process can be straightforward but there are circumstances which can complicate matters. 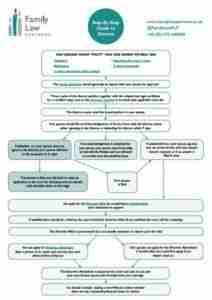 A draft petition is prepared and it would usually be shared with your spouse for approval.
The Petitioner prepares a standard form statement to confirm the petition and applies for the Decree Nisi.

Although the divorce process is mainly administrative, we would always encourage obtaining specialist advice when considering whether to petition for divorce as the process is not always straightforward.  It is particularly important to ensure you get advice on the drafting of the petition before it is sent to the court.

It is also important to note that divorce may affect certain provisions contained with a Will it is therefore advisable to consider making a new Will in contemplation of divorce or at the point of Decree Absolute.

One response on “Step-by-Step Guide to Divorce”